On October 3, 2011 my dream came true! After saying goodbye to my mother early in the morning, it was time to say goodbye to my father at 10:15, before boarding the train from Fehraltorf to Zurich.

The first surprise of my trip didn’t wait for long: the itinery display showed that I had to catch a replacement train, the train I had reserved did not run today. Since the departure time was identical I didn’t worry much about delays. Once I was on the train, they made an anouncement that passenger for Milano had to change trains in Art-Goldau. So I boarded the Cisalpino in Arth-Goldau. The procedure went smoothly, but since almost the all passenger changed trains, we had a delay of 10 minutes leaving Arth-Goldau. No real reason for worries, since I had 15 minutes to change trains in Milano.
The Italian train company managed to increase the delay to 25 minutes by the time we arrived in Milano and thus my train for Venice was gone. Fortunately the trains from Milano to Venice run once an hour, such that I could catch the train at 4:05pm. The passenger next to me explained that these connections have never worked out in the past twenty years, so in case you should plan a similar trip, also plan for a cup of coffee at Milano Centrale.
The train to Venice left Milano on time, but also managed to arrive 20 minutes late, so that my expected arrival time in Venice of 5:40pm was definitely not met by arriving at 7:00pm.
First thing to do was to organize a city map, which I highly recommend for this city of canals and bridges. Later that night, I tried to navigate without the city map, and it almost worked out. 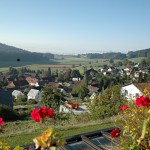 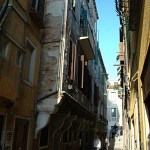 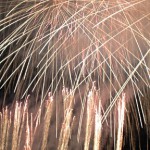 So I went to look for a place to sleep. Doing this I had to figure out the house numbering in Venice. I am used to house numbers which are unique in one street. This is different in Venice, where a house is identified by the name of the Sester (one of the six parts of the city) and a number. No wonder I didn’t find the Dorsodulo street… On the second round around Compa Santa Margerita, I had that part figured out, such that I found the Backpackers House Venice. At the door, there was a small sign that read I had to register at some bar across the Campo. The waitress there then took me to a hostel, where I finally could register and book the two nights.
Since I wasn’t hungry at all, which is why I just looked around Campo Santa Margerita for a nice bar, where I could have a drink on the street. Drinking my horribly expensive beer, I observed the people walking by, which were quite a few considering it was already after dark. Everone seemed to know somebody, which led to quite many people greeting.
What followed was part of the story “navigating trough Venice after dark without a city map”. If I had a better memory, the game would have ended successfully. Since I don’t I had to ask for the way back to Campo Santa Margerita just two corners before getting there…