My second day on my trip to Beijing consisted of kilometers of walking up and down the streets of Venice. Already last night, I got a first impression of all the canals and bridges of this city. Today this impression was confirmed and I got the feeling, that it is impossible to navigate through the city without getting lost a few times.

The goal of the day was to get an overview of the sights of this beautiful city. The sights are so many, it is impossible to see all of the in one day only. One fact remains unchallenged: it is definitely worth it to visit this city and to get lost in some of the many streets.
My walk led south from the Campo Santa Margerita to the Canale della Giudecca, which I followed in the morning sun to the Punta della Dogana. The first of the many churches I visited was the Basilica di Santa Maria della Salute. Next stop on my long walk was the Piazza San Marco. I would have loved to take some pictures, while not too many tourist were there. But the light was so bad, I delayed taking pictures until the afternoon. So I zig-zagged through the small streets of Venice until I arrived at the Biennale d’Arte, which takes place from October 10 to 17 this year. 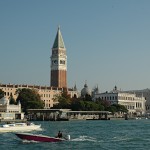 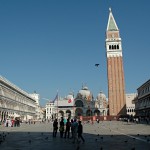 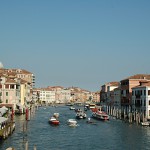 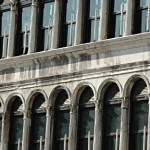 I headed back West on the Northern shore of the island, where I got lost many times in the nooks and crannies of the city. I didn’t feel like checking the city map on every corner, which is why I often ended up in courtyards or a dead end blocked by water. it was easy to tell when I was near a tourist attractions, since the number of tourists changed from close to none (or one) to streets full of tourists within one block.
One thing that was inevitable during my walk, was to compare Venice to Havanna, Cuba: in both cities you can savely walk the back streets and in both cities there cleanly wiped. And in both cities the buildings are in need of some fresh paint. Havanna is still ahead of Venice as far as destruction is concerned.
What is Venice now famous for? I suggest Venice is the city with the most stairs in the world! How is this possible for a city which is built at sea-level and doen’t have any mountains? The answer is quite simple: the street level is not much above the sea level (remember all those reports of Venice getting flooded). Since boats and gondolas circulate on the canals, the bridges need to be high enough for them to pass underneath. The result are arched bridges with stairs on either side. For any teacher reading this: should you plan a visit to Venice with your pupils, have them count all the steps in the city, that will keep them busy for a while.
Now I am happy to take a short rest, so I can finish this post, before looking for a place to eat dinner tonight. Too bad, I don’t get any money for each kilometer walked…